Another way to serve a danish rice pudding dessert. Although it can of course be made without chili, I do believe that, together with the ginger, it matches the sweet taste and really suits it well. They are both very discrete in the cake and gives just a hint of hot seasoning.

First make a rice pudding of milk and rice. Bring milk to a boil over medium heat while stirring. Add rice and stir well. Let cook for 2 minutes without lid. Reduce to low heat and put the lid on. Let the porridge cook until it has absorbed all the milk – it takes about 40 minutes. It must be stirred periodically during that time – especially towards the end, so that the porridge does not catch at the bottom of the pot. When the porridge is ready, take it off the heat and cool completely. For instance. put cold water in the bottom of the kitchen sink and place the pot in it to cool.

The almonds are toasted lightly in a medium hot pan – stir occationally, until they begin to smell nice and get a little color – not too much though. They can also begin to make little popping noises, but they don't neccesarily do that. Let them then cool.

All the ingredients for the base, except the butter butter, is ground up in food processor until it has the consistency of very coarse flour.

The butter is melted and mixed with the 'flour'. The mass is pressed into the bottom of a greased springform with your fingers (be careful to add some at the edges) and set it aside to cool while you prepare the filling.

Soak the 6 sheets of gelatine in cold water.

Be sure that Philadelphia is at room temperature when you're using it (remove from refrigerator ½ – 1 hour before use).

Finely chop the chilli if you use whole ones and grate the ginger. Put sugar, chili, vanilla and ginger in a bowl with Philadelphia.

Whip the cream to semifirm peaks. Whip Philadelphia and spices sugar together for a minut or two, so that the sugar is dissolved.

Stir in the cold rice porridge.

Remove the gelatin from the water and melt it over very low heat with the water that clings to it. Stir it in the mass – using the hand mixer at low speed for this is a good idea. It is important that you pour the melted gelatine so that a thin beam hits right where the mixer is running, then there is less likelihood of forming threads in the mass, but make sure now to get it all mixed well in the bowl.

Gently fold the cream into the mix with a soft spatula and then pour it into the form on top of the cooled bottom. Smooth it neatly, cover with clingfilm and put the cake in the refrigerator an hour or two.

When it's time to make the top layer, put the 4 gelatine leaves in cold water for approx 10 minutes of time.

Pour Amarena berries and their juice in a small saucepan and gently warm with chili and gelatine when it's ready (after the 10 minutes soaking). Do not boil, but must just be a bit warmer than lukewarm, such that the gelatine melts.

Remove pan from heat and stir immediately Amaretto in. Allow to cool to handwarm or slightly cooler and pour over the cold cake.

Cover with clingfilm and put the cake in the refrigerator at least an hour again – but until later or next day is fine.

Supermør and delicious goat club with a good game sauce and rodfrugttmos. There is bang on the juniper taste in this version – I think it fits great for goat meat. The chili has a deep, dark taste as clothes goat blazing.

Peel the onion and cut it into smaller pieces to be distributed in the pan. Skær kogebacon’en i mindre stykker og fordel også den.

Mix juniper, chili, salt and pepper in spice grinder and grinding it well.

Rub goat club well with oil all the way around and then massaging kryderierne well into the surface. Sprinkle the overskyende spice loosely over and fold them easily to.

Cover the dish with baking paper first(important) and then aluminum foil. It must be folded to fit fairly well to the dish, but not close hermetically.

When the time is approaching, are you doing bog as you like it. Here it is mixed with roots, butter, milk, chilli salt and peber.

Goat The club moved cautiously (it is very tender) onto a cutting board with juice groove. Cover it with baking paper and the foil from the dish, while you finish the rest.

The garlic is squeezed out of the shells and everything from the cask pour through a sieve – mas juice from mumsen in the sieve out with the back of a ladle and down in the sauce.

Server bog with sauce, goats and your favorite salad or other good green as you have come to mind fit.

There will be plenty of sauce of this portion. Store leftovers in a freezer bag or two in the freezer for a day you need. It is delicious to a steak or once chili models.

This may be a good bet for a super easy dessert, where there is still something exciting to come by in taste.

The bulbs will sagten made one or a few days before they are needed – and mousse can also if you like the heavy and dense. If it should be light and fluffy, it must be made earlier than a few hours prior to use. I think it is absolutely fantastic on both Maad.

The mousse is just a classic dark chokolademousse with chili. I like my chocolate mousse quite dark and without cream – så jeg foretrækker denne opskrift og bruger gerne 80% chokolade i den. Therefore, it is not very sweet – just chocolate delicious. 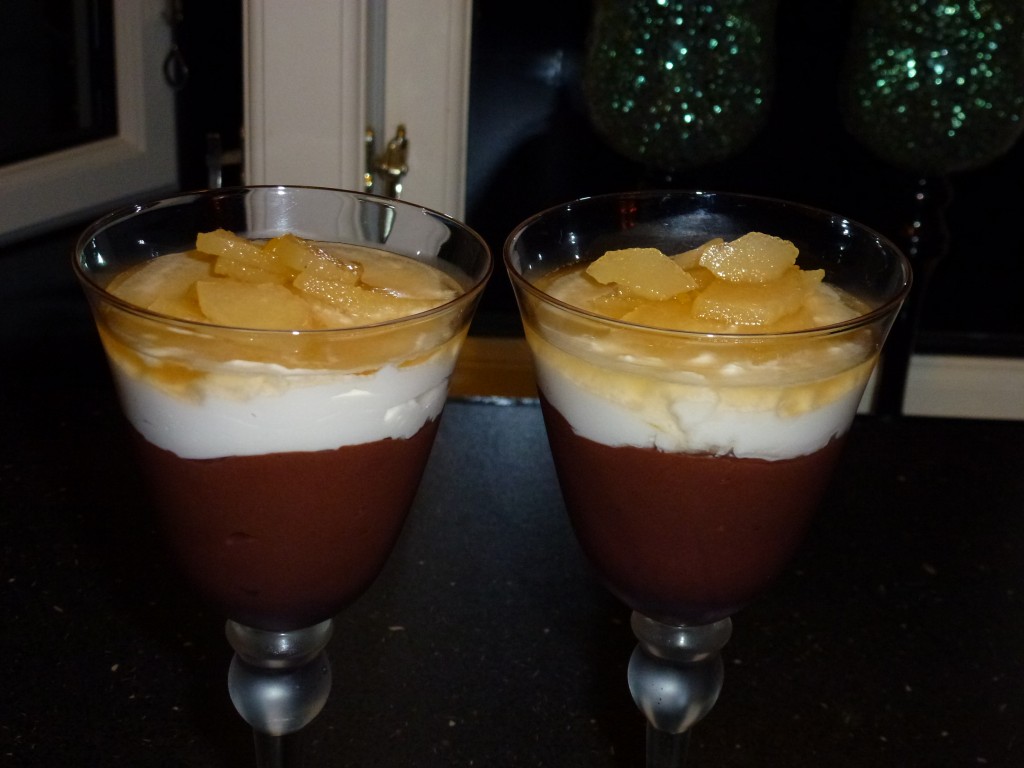 1 spsk grappa (or else – i.e.. orange liqueur of some sort is a classic for chocolate)

Clean the chilli and cut it into small cubes.

Of d, sugar, pear and chilli in a small saucepan and bring to the boil. Simmer over low heat, uncovered, for about. 10 minutes.

Put everything in a bowl, let it cool slightly and place it in the fridge – like the day after.

Melt the chocolate in a water bath at low heat in the dish as mousse must be assembled in.

Share while the eggs – whites in a large bowl and the egg yolks just kept short time in a small.

Finely chop the chilli as finely as you can and pour up to the egg yolks.

When the chocolate has melted, set the bowl on the chef's table to chokolade has approximately room temperature. I gently touches around it a few times along the way with a spatula and make sure to scrape any. chocolate down from sides of bowl.

Væk med mixeren og vend de sidste æggehvider forsigtigt i massen – it is easiest with a spatula, I think. Although it must be carefully, must continue to be exactly no more stripes in – no longer, then slips the air bubbles out and those we will retain.

Hæld straks i 4 – 6 fine glas eller hvad du måtte ønske at servere i – and put them in the fridge.

Add a layer of whipped cream on top of the mousse and top with chili pear and a little bit of syrup.

Operating syrup you can use over the next few days in the kitchen – to example. quickly boil a small glass of fresh jam with what you just fruit – or you can try other good things for the. 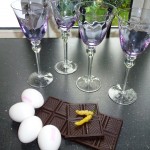 Eventually made with a Aji Pineapple (could easily take a more) i pæren og 2 Aribibi Gusano i moussen.

The original recipe is from a very old set of 'madkort’ from Living Better. Along the way it has been adjusted and is now the house's favorite way to use currants on. It is also delicious with blackcurrant – and probably other sour berries. It is something more fresh in taste (and lighter in texture) end en traditionel cheesecake – and berries in the used throughout and fresh. Du kan nu også sagtens bruge frosne med held.

maybe some. rysteribs af ribs og eller solbær, cane sugar (and like licorice powder) which stirred together and made cold – tube slightly regularly until sugar is dissolved

or ribsecoulis of blended red currants and icing sugar

Rib ribs to Kagen, so they are ready.

Crush the biscuits as coarse or fine as you like them and mix them with walnuts and melted butter.

Press mixture into bottom of a greased springform pan – a little bit up the edge – just 1/2 cm. You can use. back of a spoon.

Let it set in the refrigerator for ½ hour.

Stir cheese, cream and sour cream together well to a smooth paste. Stir in the egg yolks and then sugar and vanilla. Stir – but shall not be whipped.

Remove the gelatin from the water and melt it over low heat with the water that clings to it.

Stir gelatin in the mix in a thin stream.

Beat egg whites until very stiff and fold them into the mass. Then turn ribsene and pour it all into the springform tin.

Style cake in the fridge for a few hours and the server directly from refrigerated bærsirup med chili, (licorice)red currants, ribscoulis or licorice syrup – or whatever you think. 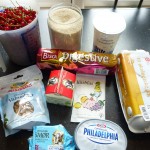 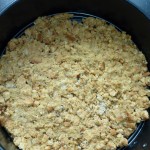 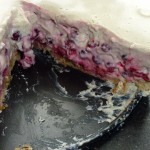 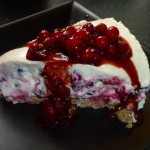 Caramel sauce here will be salted 'right to the edge’ – so you think it's just the salty side when tasting it. When it then comes to a lækker, soft vanilla ice cream it all fits into a higher unity with sweetness, strength and balanced with the salts caramel flavor.

It can also be weakest in a variant with lakrids – it beats most lakridssirup'er to ice.

Varm sukker og fløde op i en gryde og lad det simre indtil sukkeret er smeltet og derefter ved middelvarme 5 – 10 minutter under omrøring – until it begins to bubble a bit more 'viscous’ way – Here's what it also smells of caramel. There must be stirred well at the bottom of the pan and kept a close eye. Burnt sugar tastes awful – but there is not enough fået, comes caramel taste is not really the – so be aware. It's not that hard, you just need to be a little alert. It's easiest to stir with a wooden spatula so you can get good round.

When sugar mass is ready, take it off the heat and butter, vanilla, chilli and salt added. If you make it with licorice, , the powder is in the now.

Stir caramel sauce really well together and taste it if something needs to be balanced.

Ask the then allowed to cool before serving with a good vanilla ice cream.

You can easily make it with light muscovado or another sugar if you prefer. I just like most the deep flavor of dark muscovado or molasses. 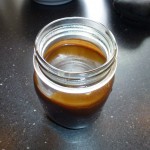 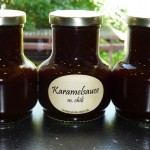 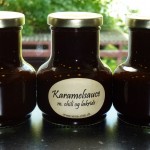 Luner on a chilly day. 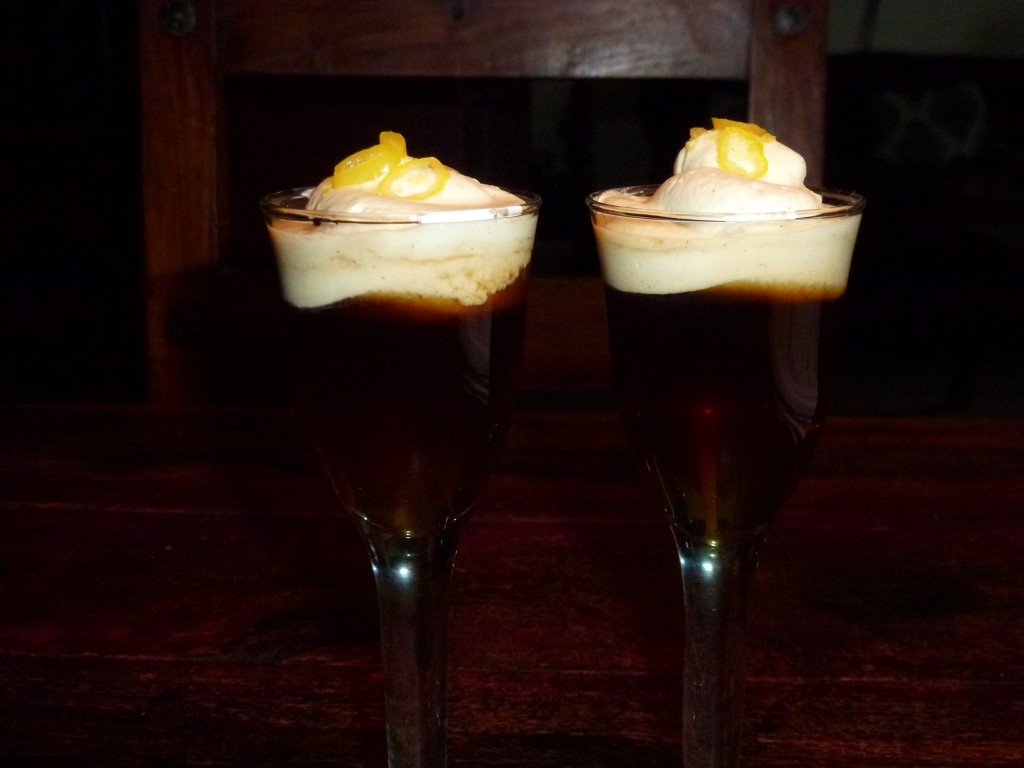 Cut some fine rings of the tip of chili and save for garnish.

Squeeze the juice out of chili mixture with the back of a spoon – use a small strainer. Tilsæt 5-10 dråber vand til massen i sien, stir and strain again. Repeat. with a little more water a few times.

Pour a small amount of chili tonight and then Galliano in a shot glass.

Using a teaspoon or a small plastic pipette to drip little more chili juice in addition to the cream (can possibly. be done by the table). 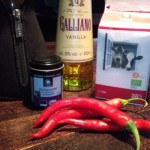 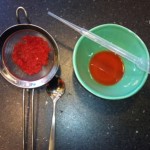 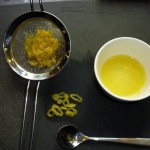 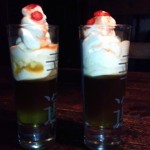