The vegan version of one of the blog's greatest hits. Even if you do not normally eat vegan foods, you can surely appreciate ingredients like rice that is cooked with almond milk, whipped almond cream that has been folded in and the coarse marzipan-like, spicy almond/cashew bottom. Another way to serve a danish rice pudding dessert. Although it can of course be made without chili, I do believe that, together with the ginger, it matches the sweet taste and really suits it well. They are both very discrete in the cake and gives just a hint of hot seasoning. Chili powder is medium hot (standard bought chilipowder) – adjust the volume if you use your own or other than standard.

END_OF_DOCUMENT_TOKEN_TO_BE_REPLACED

The classic crumble in a new version, discreetly flavored with vanilla and chili – and made with sweet dates, if you like. How discreet the seasoning is, will be up to you – I think it depends on what fruits / berries are used how much it can take. 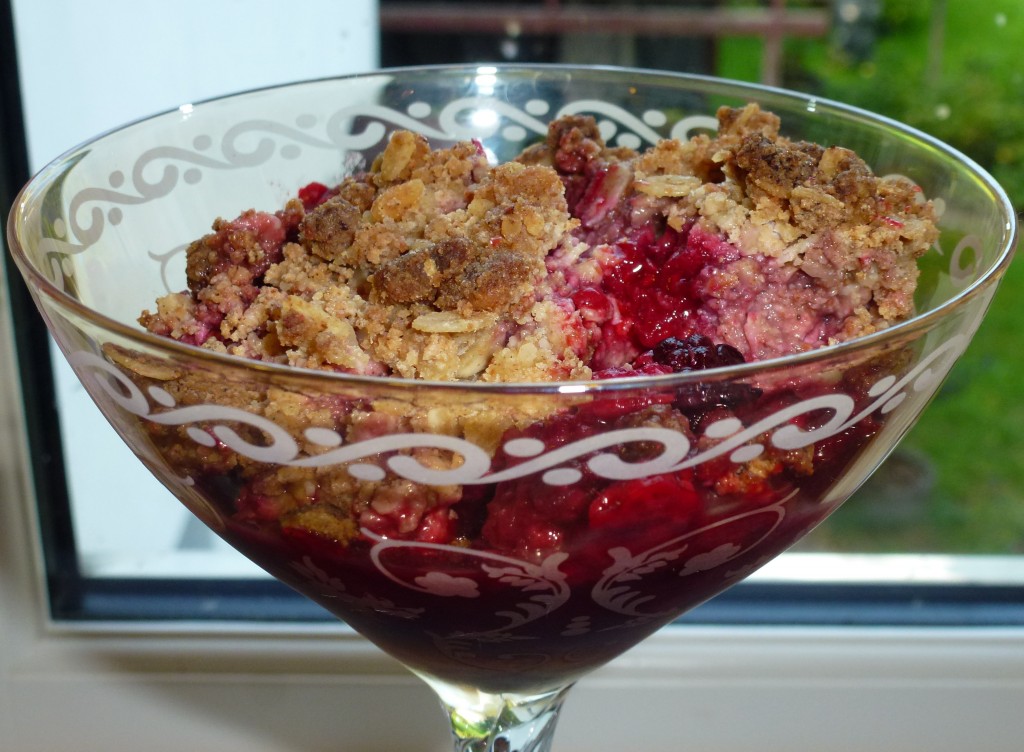 END_OF_DOCUMENT_TOKEN_TO_BE_REPLACED

The recipe here is based on a derived from Copenhagen Madhus. I've modified it slightly. 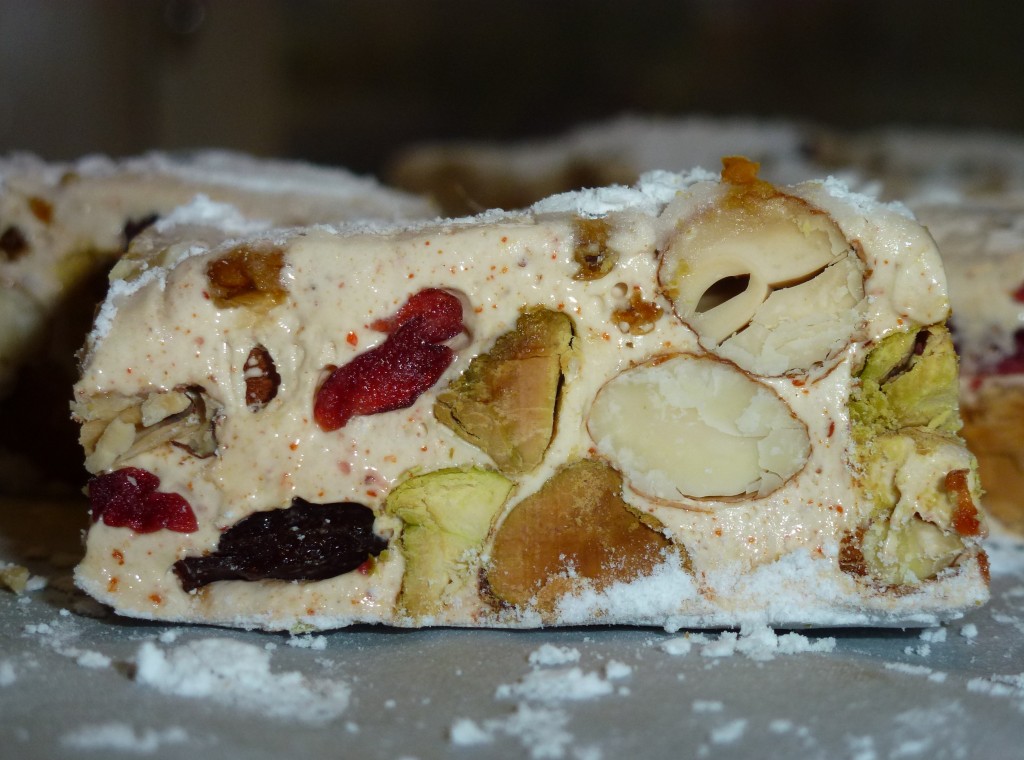 Equipment:
sugar thermometer
silikonemåtte (like the ones you use for baking) or cookie sheet
flor sugar (or kartoffelmel / flor icing sugar mixture – half of each)

Mandler og pistacienødder ristes i ovnen ved 200 grader, they are easy to light brown – turn the like around them in the way.

Sugar Sheets set of, so that it boils at medium heat, indtil den opnår en temperatur på 145 grader (measured with a sugar thermometer).

The boiling syrup is poured into thin stream into the meringue, while whisking. Squeak and ca. 10 – 15 minutter, until the mass is chewy and slightly cooled. Make chili in the way.

Silikonemåtten, or a large piece of baking paper, sprinkled with a layer of icing sugar – like are few mm thick. This added nuts and fruit gently. Do not put them in the middle and push them around – then remove flormelisen. Place them neatly in handfuls, as powdered sugar layer stays where it is.

Pour nougat'en beyond and use silicone / baking paper to fold the mass in half – Open the paper and fold the other way – a few times for fruits and nuts are distributed. Sprinkle a little powdered sugar on overladen underway If there is no. Watch out especially out at the edges. If the mass sticks to the baking paper at this stage – it may be impossible to get to get rid (Mok mass onto a new sheet of greaseproof paper if it happens).

When you think that fruit and nuts are well distributed, then sprinkle a layer of icing sugar, put a layer of wax paper and roll immediately nougat out with rolling pin to the desired size. If nougat'en hangs over the baking paper in some places at this time, so just let it – this gets easier once it has cooled.

Let it cool completely on the kitchen table or in the fridge – like the day after, and cut into desired pieces. If the blade sticking to nougat'en, then dip it in hot water before cutting each cut.

Best stored in the fridge. Like in the entire sheet or larger pieces, where you saw only cuts it to be used every time.

It requires a large mixing machine or a very powerful electric mixer to make this portion. Even my 500W Dualit must have breaks along the way – so a large mixer is preferable.

The batch here is great, and it can obviously be halved, or how you now want to divide it down. White you make full portion, must be large bowls and pots in use. Jeg bruger 5 liters gryde til sukkermassen (the bubbles well up along the way) og 5 liters røreskål. Pots and pans are very sticky, so maybe it's a go’ idea to make a large portion. now when you still have to do the cleaning. It's not so hard to get by, as you might think, when faced with the sticky mass.

To coat the nougat'en with tempered chocolate – see . little about chocolate. Either a thick layer on top before you cut pieces, or each piece of which can be dipped in chocolate.

It is important to your silicone mat is of the type which can withstand high thermal (beregnet til at bage på og lave sukkerting på) – I would not do this on one of them which is merely intended to roll cold dough out on.

You can use all kind of nuts and seeds as you like with, or in place of, almonds and pistachios. E.g. hazelnuts, cashewnødder, pine nuts, paranødder osv. Are not you so glad dried fruit – so do it. Some choose to use colored cocktail cherries – it looks mighty fine.

When you have to have the mass of the dish, it is advantageous to dyppen a hard dejsraber in hot water and to use the – deep the CE. sometimes along the way.

Would you like to use your hands to shape and knead the mass, go easy if coated in a thin layer of neutral cooking oil first. 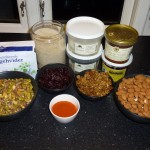 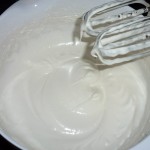 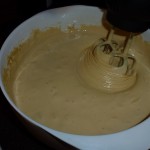 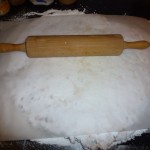 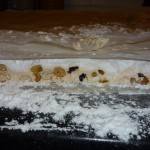 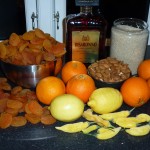 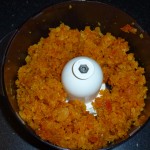 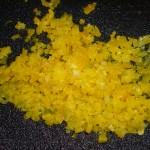 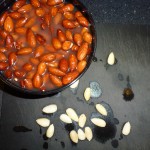 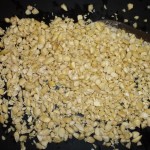 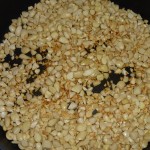 You can use whatever you feel like nuts and grains – like the mix if you like. The goals are not as important – but not low krokant before, you can use the recipe here as a starting point. Next time you might have more or less of sugar, salt or chilli. You can choose to chop the almonds / nuts before you get them in – I leave them all because I think it looks good to you see them clearly when krokanten cut.. 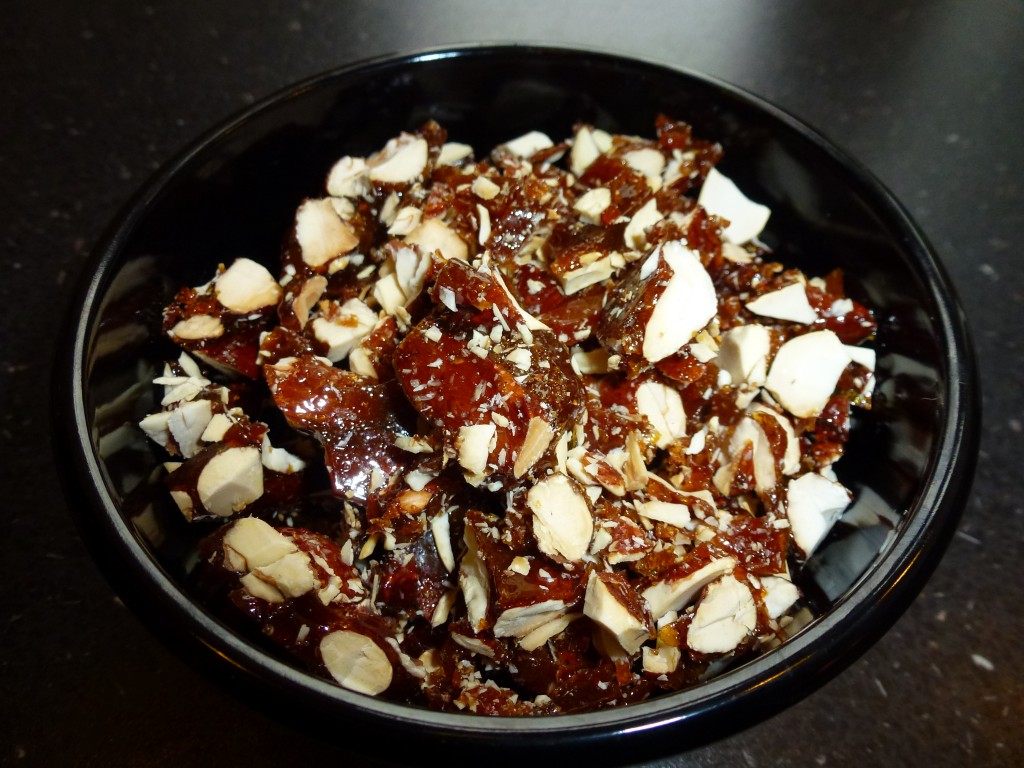 Find the ingredients and target them by.

The sugar melted quietly over medium heat in a frying pan. It is important that the temperature is not too cold – then melts it never – or hot – so it burns quickly on. Keep a close eye on it.

When it is turned molten salt and almonds well around the sugar mass. Let stand a minute or two and heat through – tonsils may begin to pop, it must be good.

Just inside the shell of the heat Stir chili powder around the mass. Do not pour it in before, then it can Branka in the hot sugar mass.

Pour the mixture onto a baking sheet and let it cool completely.

It is important to krokanten are kept in fully air-tight container in order not to become soft. maybe some. residual is delicious finely chopped on morgenhavregrynene or youghurten – or just as a snack.

Of course you can spice up your crunchy with everything except chili – Try the items. with cinnamon also. Chili and cinnamon Smag also fantastic together.